To model a process containing a crude oil or condensate, the properties of the oil must be known or at least estimated. Determining the exact composition of crude oils and heavy condensates is not feasible because of the enormous number of components included in these mixtures. Instead, a boiling curve analysis is usually performed by measuring the temperature of the distillate fraction at specific cumulative volume percentages. These boiling point measurements are then related to the physical properties of the oil or condensate using correlations developed by industry. The correlations estimate properties such as specific gravity, molecular weight, viscosity, critical temperature and pressure, etc., based on the crude oil analysis. A crude oil mixture may be modeled as a single component or as a group of hypothetical components which represent the boiling curve of the crude oil mixture.

ProMax also has an internal library of almost 200 crude oils with boiling curve information obtained from the open literature. Any of these oils may be added to a ProMax file.

A crude oil or condensate may also be characterized based on Carbon Number as described in Defining Oil Components Using Condensate Mode. Using this method, a boiling curve assay is not required, only the amounts of components with a certain carbon number. The boiling range for each "Carbon Number" cut is determined by correlation. This Condensate Mode option is useful for hydrocarbon analyses which list some or all heavier hydrocarbon compositions as "Cn's" or "Unknown Cn" instead of the actual species, and a boiling curve analysis of the condensate or oil sample is not available.

A crude oil or condensate may be defined by assay using a boiling curve analysis which usually consists of temperature measurements of distillate fractions at specific cumulative volume percentages. Other properties such as molecular weight, specific gravity, or viscosity may also be determined at specific cumulative volume percentages. More commonly, molecular weight and specific gravity are supplied as bulk properties which are measured for the overall oil sample. These boiling curve measurements and bulk properties are then related to the physical properties of the oil or condensate using correlations. The more data available, the more accurate the characterization.

This block estimates the composition of a mixture of species that represents the bulk properties of a given Oil sample. This method provides greater detail than the standard Oil characterization utility. Molecular reconstruction of a complex mixture from assay data (bulk properties) is performed based on the species set defined by a simulation Environment. The Oil Speciation block also provides access to assay data for 200+ crude oils and their fractions. 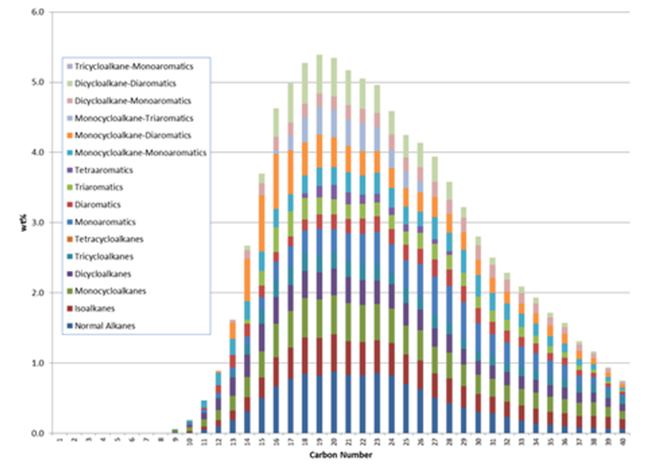 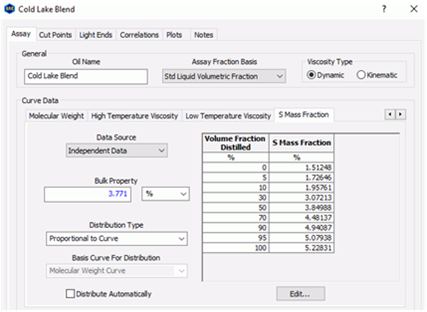 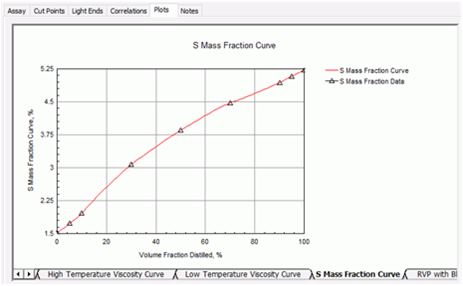